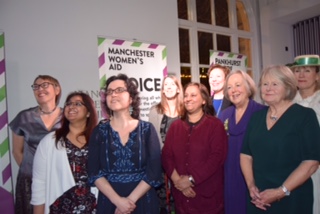 What a night! After months of planning and for me stress, our Suffragette Tea party was about to start. There was such a buzz in the room. It looked amazing thanks to our caterers Room Forty and the staff of the Central Library where it was held. 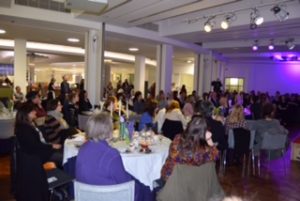 A packed venue on the night.

People arrived, film crews arrived, our Lord Mayor Eddie Newman came and the Mayor of Greater Manchester Andy Burnham, and of course many of the women who sent their words in to be archived for future generations to view. Gail Heath, CEO of the Pankhurst Trust and Women’s Aid, introduced all the people through the night. The three contributors whose pieces were included in our re-imagined Suffragette Magazine Ciara McVeigh, Anne Eva Ruffai and Claire Mooney read out their entries. It was wonderful to hear their words. 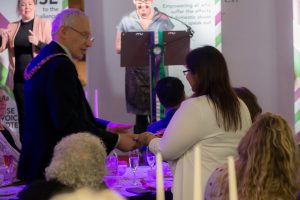 The Mayor of Manchester Eddie Newman receiving the first copy of the first edition of the reimagined Suffragette from Tasneem Perry, chair of the Women’s Words Mcr steering committee.

A flash mob of Suffragettes took to the floor to remind us on the eve of the 100 years since the first women were granted the right to vote, how important it still is. Women must use their right to vote.

Dr Helen Pankhurst, the great-granddaughter of Emmeline Pankhurst and women’s rights activist also added her words to the evening. 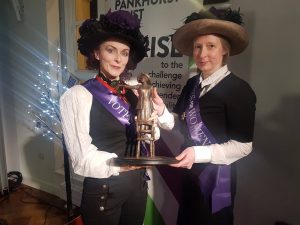 Kitty and Lilibeth, the time travelling Suffragettes with a statue of Emmeline Pankhurst.

We had a rousing performance from The Time Travelling Suffragettes.

Rosie Garland, Alex Keelan and Reshma Ruia the three commissioned writers whose pieces are in the magazine read their words. Alex Keelan’s words particularly resonated with me.

Alex said that she didn’t think she could be a writer –  she didn’t feel good enough but now due to support and encouragement from another writer, Claire Mooney, she is a very successful writer .

Everyone should have a go. That is why the workshops were so important in the process of Women’s Words so women can say “I can do this, I can write”. Having attended one, I realised the power of words.

Tas from WordPlay the artistic partner on the project spoke about their great input. Julie Hesmondhalgh on behalf of the BBC read two poems related to the time of the Suffragettes.

I spoke as President of Soroptimist Manchester, another partner in the project, about the work we do and the pleasure we had in being part of Women’s Words.

The work from some of the workshops was on display and will be on display in the Central Library until the end of April. This spoiled forms and includes rosettes created with messages from women experiencing homelessness, and words on aprons from women going through the asylum seeker and refugee situation. 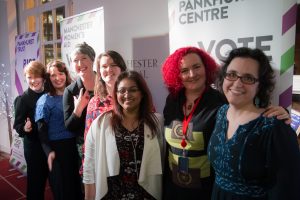 The artists who worked to bring out the creative vision of Women’s Words Mcr.

This project is not finished but for me, in spite of the highs and lows, it’s been wonderful so far. 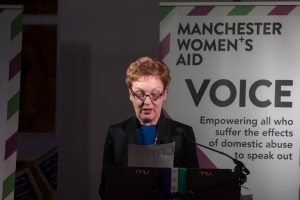 I am an interdisciplinary ideas-based visual artist, living and working in Manchester.…